Welcome to a new thing on this blog... I will be digging through my archives of accumulated bullshit and posting random tidbits here from time to time of stuff that isn't available or maybe has never really been heard outside the band. Keep in mind, this should only be for the really curious or the extremely die-hard, as all of it will be raw, poorly recorded (and probably poorly played), and mostly ripped from crappy 3rd generation cassettes. Most of our (comparably) listenable material from the past was featured in the exhaustive compilation 2CD (or limited 3CD) “Platters of Splatter”. That said, there is still some random stuff floating around down there, deep within the cobwebbed recesses of storage spaces, long neglected boxes and shameful, repressed memories.

I figured we should post “Goregasm” up here first, as it's the oldest thing I have on hand (I think I may still have a copy of our 1st rehearsal tape in storage... it's pretty cringe-inducing) and it's something people here and there have asked me about through the years.

A bit of history to put this recording in context is definitely in order. In January 1992 we released our first demo tape, “Dissecting the Caseated Omentum”, followed by our first EP that May on Afterworld Productions – called “Excreting Innards” (both releases can be found on disc 2 of “Platters...”). Jason Wineland, the guy who released the EP (as well as the excellent Putrifact 7”) was getting pretty ambitious and decided he wanted to release a full length album from us. Well, at the time, I was 16 years old and a junior in high school. The oldest member of the band at the time was our bassist, Ben Marrs, who was 18. Suffice it to say, we were far from organized, and after recording the EP, we could no longer rehearse in my Dad's garage – the cops were called too many times – so 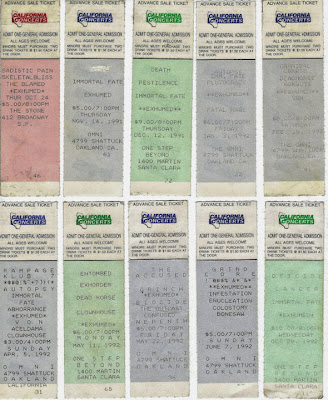 rehearsals were sporadic. We would sometimes share a jam space (or rehearse at someone's house) with a punk band from my high school called F.D.S. (Flying Dead Skin – wow... that name sucked then and has gotten worse with age), and sometimes we would just end up playing shows cold. (check out some of our old pay-to-play tickets from '91-'92 at the right...)

We had booked time to record our “album” in October, but had barely rehearsed. We also only booked two days in the studio – the same amount of time we had taken to record the six-song demo and then our subsequent six-song EP (although two songs on the EP were under five seconds long) – and we planned to record a twelve song album in that space of time. Needless to say, not the brightest planning on our part. Our reasoning was that since most of the songs on the record would be from the demo and EP (we had four brand new songs, a noise song, and re-recorded eight songs) that it would take us less time to record them. Of course that wasn't factoring in time for mixing, or the fact that we had barely rehearsed before the recording. The naivete of our planning for this still kind of astounds me. Afterworld never offered a budget for recording – and to be honest, it never even occurred to us that one of the primary functions of a record label was to fund recordings. We just were having fun making a racket and the fact that anyone was interested in helping us do that lit a fire under our collective asses.

It should come as no surprise if you're still reading that the resulting music is pretty bad, both in performance and in production. But it is a funny artifact from the band's embryonic stages. Shortly after this recording, 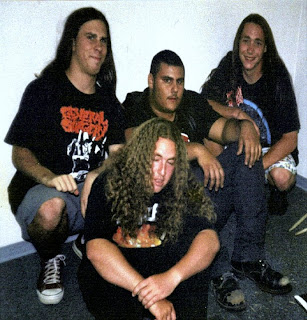 we kicked out Ben Marrs for some reason or other – it all seemed very serious at the time – I think he didn't show up on time for a gig or something like that. Mostly I think it was because he was crazy about bands like Atrocity and Demilich and wanted to go in a weirder, more avant-garde direction, or maybe because he was 18 and a lot further along in life at the time, while Col and I were still very deep in a “read comic books, play RPGs with many-sided dice, afraid of girls” kind of stage. (pic at right - nerding out circa '92/'93, L to R: Me, Derrel Houdashelt obviously very baked (below), our friend Brian "Terrorizer" Rubio (above), Col Jones with his boyish grin).

Even after recording this, I think we all realized that it was a bit of a step backward from the demo and EP in terms of performance and sound quality. Jason let us know shortly after we finished recording that he was folding the label, and “Goregasm” faded into the background. For some masochistic reason, we started selling it as a demo cassette in 1994 (the cover, designed and photocopied by Ross Sewage can be seen below to the right), which kind of kept it on a few people's radar. For me, I think this is more of a novelty or a completist kind of thing - I sure as hell wouldn't invite people over to my house for a listening party for “Goregasm”. But there are still some cool riffs and ideas that given some more time to rehearse and execute could have been a positive part in the band's development, rather than a red-headed stepchild. We decided not to put this on “Platters...” because the quality is just so bad, and most of the songs are featured elsewhere in different versions. 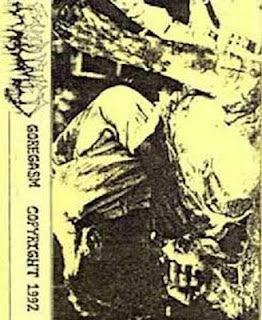 I actually had an offer not too long ago to have this issued as a limited vinyl-only release, but to be honest, it's so rough around the edges (and you should all know by now that we're far from perfectionists) I wouldn't want anyone to pay for it. So go ahead and download the bastard if listening to musically inept high school students bite off way more than they can chew is your idea of fun.

I don't think that there ever was a concrete track order, so the files are simply in alphabetical order. For whatever reason, a couple of the files contain two songs, and some of the file names don't exactly match up with the track names, so here they are: 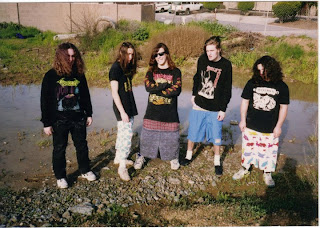