Crap From The Crypt: Exhumed live, past, present, future, and distant past

I'm a firm believer that there are certain criteria you have to fulfill to be in an actual band - and one of the most important is that you have to play shows. That's what bands do: they write songs, they rehearse, they record, and they play shows. If you don't play shows, you're a "project", not a band. Sorry, but that's just the way it is. Our current logistical situation, with myself and affable sticksman Mike Hamilton in the San Luis Obispo area, six-stringer and beer repository Wes Caley in Arizona, and bassist / vocalist / perpetual brunt of height-related jokes Rob Babcock in Orange County California, you can probably guess that we don't fulfill the "rehearsing" criteria I mentioned above too often.  That said, we do play a lot of shows.  Last year, we played 88 shows in sixteen countries, and we didn't get started until April. In case you live in Europe or North America and somehow missed us, don't worry, because 2012 looks to be just as intense.

We started off February 11th, with a corporate-rock cash-grab extravaganza: a free Relapse Records showcase with our labelmates Tombs, Revocation, Black Tusk, and Royal Thunder sponsored by everyone's favorite car company / bizarre benefactor of free shows, Scion Motors.  You can read a review of all the craziness here.


Here's "I Rot Within" live at the Roxy. You can also get a good sense of what complete dicks the venue was being to the kids diving.


As you may have heard, we had to cancel our scheduled dates in Brazil due to issues with our visas - it became a total clusterfuck of a nightmare, let's leave it at that.  I am totally bummed about the whole debacle, but trying not to dwell on it too much.  At least we have a bunch of other tours coming up. Next week, we head to the olde country for our "Grind Over Europe" tour with Rotten Sound and Magrudergrind for three weeks. For those of you who aren't European grindcore nerds, "Grind Over Europe" was a tour that the late, lamented Morbid Records put together in the mid-90s with Haemorrhage, Dead Infection and CSSO. They did a part II in 1997 with Hemdale, Nyctophobic, and... drum roll, please... Exhumed. I thought it would be fun to resurrect the franchise and get on the road with some awesome bands that love blast beats as much as we do (or probably more!). 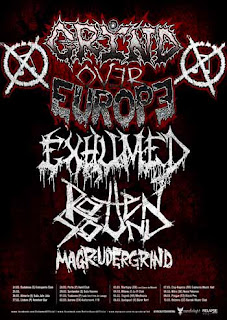 Exhumed live on the Grind Over Europe II tour in (the appropriately named) Rotterdam, Holland back in 1997. Don't worry, I have no idea what we were playing here either.

At any rate, once we wrap up that run, we head to the UK, land of tea, crumpets, bad teeth and all of my favorite bands (I'm looking at you Napalm, Carcass, Bolt Thrower, Ripcord, Extreme Noise Terror, My Bloody Valentine, The Cure, Moose, Chameleons, Angel Witch, Diamond Head, UFO, Judas Priest, Deep Purple, Amebix, Discharge, Crass, etc. etc.) for a week with Black / Grind maniacs Anaal Nathrakh. 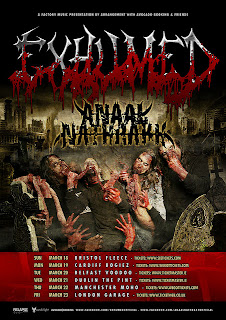 We'll also hit Ireland for the first time, which means Wes and I can go visit the Phil Lynott statue, drink whiskey, and copiously weep at the loss of the greatest songwriter the world has ever known.

At any rate once we leave Ireland and England, or as I call the UK "basically America, but with castles and shittier food", we'll have a few days off before we hit the road with Abysmal Dawn and Arkaik on our way to meet up for a month of shows as direct support for this band some of you may have heard of. What band, you ask?  Fucking Cannibal Corpse. 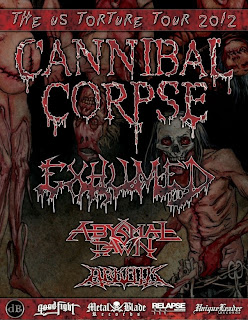 That's a month-long run, all over the good ol' US of A. Once that's finished, we'll head north from the Sunshine state to meet up with yet another North American tour which hasn't quite been announced yet. Suffice it to say we'll be doing a few dates in the northern midwest and leftward and several shows in the land of the McKenzie Brothers - yup, Canada. After that all wraps up, we'll finally get a bit of time off - and it also will be fucking June.

Oh, I almost forgot, this July we're doing the Obscene Extreme Festival in the Czech Repubilc - pretty much the biggest Grindcore party in the fucking world, with Nasum, Asphyx, and Discharge. Lineups don't really get better than that, dude. 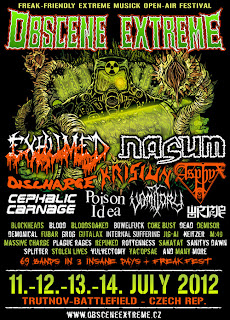 And after that, it's back to North America for Summer Slaughter with Cannibal Corpse (again! stoked!) and a ton of other bands that may or may not have been announced yet, so I'll keep quiet about them here. I'm getting way too old for this shit!  2012 may not bring the end of the world, but it just might succeed in killing little ol' me.  After all of that madness is concluded, we're going to try to hole up in a recording studio and crap out yet another record of unlistenable garbage in a continuing effort to fulfill our record contract and see just how much of Relapse's money we can waste over a fourteen-year span.

In keeping with the theme of discussing our live exploits, I've posted a couple of live shows for your listening... I was going to say pleasure, but that might be a stretch. How about just "for your listening".  That's pretty good broken English - kind of like how people used to always send letters asking to "trade for your stuffs" back in the early '90s. Good times, bad grammar.  At any rate, these two shows are almost a decade apart, have 100% different set lists, vastly different line-ups and should be good for a laugh or two.  Up first is a live recording from a show we did in 2004 in Vancouver.  We were touring for "Anatomy is Destiny" with Uphill Battle supporting, which was convenient since Danny Walker was playing drums for both bands on that tour.  The lineup for Exhumed at that show was yours truly on guitar and vocals, Danny on drums, Leon del Muerte on bass, and Mike Beams on guitar and vocals.

The second show goes waaaaaaaaaay back to 1995, back when there was no internet, people thought that Pitch Shifter were "the future of metal", and I could still fit into my Sodom "Obsessed By Cruelty" sleeveless shirt but could not yet legally drink. One of the best things about this recording is how obvious the complete disinterest of the audience is. I remember this show distinctly because I had asked for the day off of work at my job at Tower Records (remember them? They were a record store chain.  Remember those? They were neat.) and they shut me down, so I had to call in sick like a complete dick. A couple of my supervisors tried to trick me into admitting it, but back then I was too good at lying to fall for it. Oh, to be 19 again, when I just didn't give a fuck about anything and worked even crappier jobs that I have in my 30s.  Anyway, the lineup for this show is myself on guitar and vocals, Ross Sewage on vocals, Col Jones on drums, Derrel Houdashelt on guitar, and Matt Widener on bass.  We had just recorded the "Horrific Expulsion of Gore" demo the preceding summer, which was getting great reviews in tons of fanzines and getting traded all over the world - but no one in the bay area was into it at all, as evidenced by the crowd at this show.  You can also observe that the stage banter Ross and I were employing had a really, really long way to go in those days.

1. Ziploc Bodybag
2. Excreting Innards
3. In The Throes Of Ecstacy
4. The Pallor Of Unliving Flesh
5. Pyathrotic Discorporation
6. Puke Of The Dead
7. Vagitarian
8. Radiator Bitch

If you want to really dig into the vaults, you can check out a show from 1992 in its entirety here - if you can make it through the whole thing in one sitting, you're a braver soul than I. In my defense, I wasn't even 17 yet when this show happened - the other guys were 17, Ben was 19 or so at the oldest. And no, I have no real explanation for the shorts. The really cool thing about that link, is that you can check out Phobia, Mindrot and Immortal Fate sets from the same show there as well!  Plutocracy also played that day, and almost started a riot when they lit an American flag on fire onstage.  Good times!
Posted by Matt Harvey at 1:20 PM 2 comments: