Exhuming Exhumed: Once more into the breach, dear fiends...

Friday October 1st found your humble narrator once more headed southbound on US Highway 101 towards Camarillo. With Wes and Danny in tow, and southern California traffic in full-on snarl mode, we continued south to grab Danny's drum kit, and then onwards to Corona, California, a southeastern suburb of Los Angeles, and a town we've played many times at the sadly defunct Showcase Theater. In fact, I actually met Danny and Wes for the first time at one of those shows! The excessive LA traffic could only be coped with by enjoying some little-remembered Death Metal gems by Demilich, Mordicus, Disgrace, Xysma, and Carbonized. Initially, we had planned to record the drums October 15-17 but, due to Danny's impending Intronaut tour (supporting Helmet) which kicks off this weekend, we had to push the dates forward. Things were a bit rushed, but overall confidence was high heading into the process. This past weekend was (as anyone on Facebook probably already knew) Leon's birthday, so he ended up staying in Echo Park and no doubt destroying brain cells by the thousand while we toiled at the sweaty work of laying down the drum tracks for album number four.

We arrived at Trench studios after nine pm Friday, where we met up with engineer John Haddad (ex-Phobia Dru 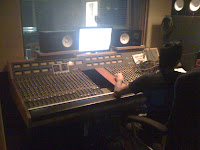 mmer, and producer of bands from Hirax to Intronaut and many, many others in between) to set up the kit. John used to play drums in Phobia years ago and has been around the LA and OC scenes for a long time. In fact he's recorded many of my friends' bands, and worked with Danny on Phobia and Intronaut records, but somehow I had never actually met the guy before Friday night. Being a drummer puts him in a great position to understand what goes into getting great drum tones and his experience in the scene has gives him the right perspective to properly record the heaviest, noisiest, fastest shit. You can see this extremely flattering shot of the back of his head just above, taken by our staff photographer, Wes Caley. Trench is set up in John's house, a spacious place with a great backyard, a lazy cat, and most importantly, a pool and jacuzzi. After a long day of driving, Wes and I headed to the AM/PM for (surprise!) beer, while Danny and John got things going. After setting up the drums themselves and the microphones, it was too late to get much else accomplished besides inebriation and sleep.

The next day, we were u 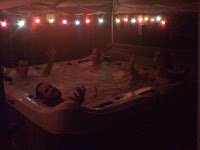 p and running by noon-ish and things were finally underway. Wes and I switched off playing scratch guitar tracks (I played the songs I wrote and vice versa) as guides for Danny. While Wes was tracking I took advantage of the opportunity to watch the extremely frustrating SF Giants Saturday game and get myself properly pissed off. The tracking started a little slowly, but after the first three songs were completed, we were clearly on a roll. The heat in the control room was stifling (sweat was literally pouring off my face while tracking), and I can only imagine how toasty Danny must have been blasting his way though eleven songs that day. By then it was time to adjourn to the jacuzzi and enjoy the reward for a day's work well done: several dozen beers. Gravehill drummer and all around swell guy Rhett “Thorgrimm” Davis and my long time sister-of-metal Lili stopped by to hang out with us, John and his roommates, Scott from Abysmal Dawn and “Bubbles” (so named because he was so shit-faced that he turned the bubbles in the jacuzzi on with his belly while crawling over the control panel on his way in). If you can enjoy the photo of our man stew above, you've got a stronger constitution than I. Exhausted but extremely happy with the progress we'd made, we headed to a nearby Motel 6 for a more tranquil night's sleep.

The next day, after some real 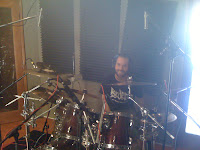 ly gnarly (in the bad way) veggie burgers from Denny's (I'm glad that I opted to wait and get a turkey sandwich and an apple at AM/PM) we returned to the Trench to pick up where we left off. All of Wes' songs had been tracked on day 1, so I settled into the control room to knock out the last four songs we're considering for the album and the three bonus tracks. One song still had some arrangements to be finalized – after all we'd only had four rehearsals – and that was the last one we completed after re-recording one tune from the previous day. You can see Danny above left, feigning amusement as he hears me utter the phrase "Sorry Dave, it's just not fast enough" in my best impression of Mick Harris' accent from the Hard n' Heavy Grindcore edition videotape. That handsome beast below left is yours truly, looking moderately confused and tracking scratch guitars - which is an improvement, as I'm usually feeling extremely confused while playing.We finished strong around five o'clock by which point, Danny's brain and endurance were pretty much maxed out. After hitting the nearby Del Taco for what felt like the millionth time that weekend (Friday night, Saturday mid-day, Sunday evening twice) Danny and John settled in to edit the drums 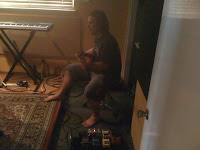 and make sure all was as it should be while Wes and I watched TV and I snuck in a nap in anticipation of the long drive ahead. 18 songs were edited and double checked, and everything was loaded onto a flash drive by midnight or so, and we all packed back into the car to head home.

The ride home was a strange mixture of feeling exhausted from the work and energized by the great performances Danny had just put in. Wes and I developed a concept that Leon had come up with for the cover and we finally nailed down what we want to do for the artwork, which was a big question mark resolved. With Weird Al Yankovic in the background, we discussed more ideas about what we wanted to do in the studio as far as guitars, bass and vocals at the end of the month. Having three weeks between recording the drums and everything else is definitely a little weird and frustrating, since we were all really pumped about the work Danny had done and excited to get underway with everything, but we'll use the intervening time to refine our ideas, practice along to the drum tracks, and write our solos. I personally can't wait to head to Arizona to get the rest of the record done at Arcane Digital Recording.

I dropped the lads off at their respective homes in Camarillo and headed north into the light early morning drizzle towards the Central Coast and home. Feeling a little reflective, I put on some Sigur Ros (my favorite band at the moment) and contemplated what we had accomplished and what lay ahead. Considering that at the beginning of the year I was living 2,500 miles away and hadn't been in a band for over a year and a half, and now I'm recording the first album of new Exhumed material in seven (!) years, 2010 has been interesting to say the least.

Stay tuned for more exciting chronicles of our never-ending battle for truth, justice and free beer. Oh yeah, and we'll have news about some shows in Europe soon as well. I look forward to boring the pants off you all again soon with the next installment of an ongoing series that I wanted to call“The Life and Times of Mortimer McPherson, Enterprising Boy Bootblack - a Profile in Pluck”. Unfortunately, that idea was vetoed by the suits at Relapse, and now I'm stuck writing about my band instead.

Harvey and the usual gang of idiots...