Okay, well, this is as rapid-fire as I get apparently. Anyway, where were we?!? Oh yeah, just getting home from Mexico City. It's always nice to come home, especially after a grueling weekend like the one I had in Mexico City. At any rate, we were home for a few days in between Mexico City and Maryland Death Fest. Ultimately, we were viewing MDF as probably the most important show we had lined up in the first half of the year, as everyone would be there – the kids, old friends who'd seen us at our best and our worst, press, label, agent, ex-band members, etc. We felt that if we had a good show and pulled it off at MDF, we would be legitimizing all the other shows and really letting the folks know that we were back and could still deliver the goods. Especially with the amount of studio trickery available these days, almost anyone can make a heavy sounding album, but to be able to really kick ass live when it counts, that's what separates the men from the boys. At home I was still shitting green water but otherwise feeling pretty good. We tried to put a rehearsal together for Wednesday night, but it was a bit of a logistical nightmare between me and Wes getting to LA, Danny's Intronaut rehearsals, my Gravehill rehearsal, and Leon's job so we finally capitulated around 11:45 pm and headed to Long Beach to catch a few Z's before our flight the next day.

Undaunted, we readied ourselves for the flight to Baltimore, Maryland – excuse me, I meant Bodymore Murderland. We boarded the plane with a minimum of hassle, aside from getting an additional oversized baggage charge for Leon's bass which was total bullshit – had never been charged extra for it before and haven't since. Air Tran are just dicks.

At any rate, after some last minute detail-sorting out by yours truly we had our shuttle from the airport and our hotel situation mostly sorted out. While waiting for our shuttle, the lady at the counter was cracking us up. She was an overweight black woman talking on the business line for t

he shuttle to her girlfriend, gossiping very loudly while sucking on the remains of a chicken wing. She would change her tone of voice periodically and say things like “Good afternoon, sir, I'll be with you in just a moment”, then turn around and return to her conversation. I was trying incredibly hard not to laugh. Leon just turned to me with a completely straight face and said in a very quiet, serious voice: “Stereotypes.” I had to walk off for a minute and laugh into my hands. In no time, we were on our way to the very nice Tremont hotel in downtown Baltimore.

We had two suites for the first night, then one suite for the entire weekend, since Danny was leaving Saturday morning for the Intronaut European tour. Leon and I sacked into our suite, showered up and then headed down the street to the venue to catch Tragedy and Cathedral, who were both awesome. I saw a ton of old friends on the way in, and ended up hanging out with the Cathedral folks courtesy of Scott Carlson for most of the night. I'm sure Lee Dorrian later berated Scott for allowing me in their company because of all the irritating Napalm Death questions I asked him. I can be such an annoying nerd when it comes to my favorite bands.

Friday was our day to play, so the challenge really was just staying sober long enough to pull off a good show. We went out to lunch to a nearby Irish pub, and then back to the hotel with ample time for me to hit the gym and change and relax before the show. Anyone who was at this festival will be able to attest to the fact that it was ridiculously, swelteringly hot and very, very humid, especially for a native Californian with a stomach infection like your humble narrator. I was incredibly dehydrated the whole weekend, which made it difficult to drink as much as I would've liked to, but regardless, we were feeling pretty good about things as we got ready to go on. We were literally surrounded by old friends, Col (Jones, our original drummer), Matt and Marissa from Cretin, the Gravehill guys, the Relapse crew, Albert and KSP from Decibel, Joe from Skarp, my sister of metal Lili, Tom Hailey, our intrepid agent Dan Rozenblum, and many other familiar faces were at both sides of the stage. The room filled up really nicely as well, so things were looking good. 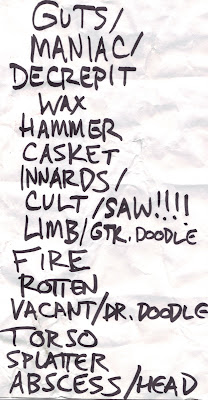 The sound onstage was not so great, but apparently it sounded good in the audience. We started blasting through our set, not realizing that due to some rain outside and the subsequent set-shuffling it had caused that we were going to have to cut things a bit shorter than we'd planned. The fact that Kylesa, who played right before us (how they got stuck playing at the exact same time as Neurosis is beyond me, considering that they're probably pulling from the exact same crowd) used all their own gear instead of the festival backline like every other band did (including us) and had to do a complete tear-down after their admittedly killer sounding set didn't help matters any. By the time we got through “Forged In Fire” (not an Anvil cover, haha!) we were unceremoniously informed that the next song would be our last. We ended up cutting “So Let It Be Rotten, So Let It Be Done” from the new record, as well as “Torso” and “Vacant Grave”. Oh well, there's always next year. We managed to cram “The Matter Of Splatter” and “Open The Abscess” into the “last song” and left the stage sweaty and stoked. Col liked it, so I figured it must have been pretty good, as he's always been the first person to tell me when anything sucks.

The rest of the weekend was a bit of a blur, between the Cretin set I played on Saturday, Cianide ruling the universe, and a pretty intense night of partying, and the Gravehill set I played on Sunday. The heat was insane on the outside stage, and between the beers and stomach infection and a week of dehydration, I was pretty much spent. I stuck around and caught some of the Nokturnel set and then went back to the hotel and just laid in the air conditioning for a couple of hours dozing off here and there. I swear, I have the worst timing ever. Of all the weekends to not be 100% for partying, the weekend of MDF is NOT the one. Alas and alack, it was still a great weekend and thanks to all the friends and folks we partied with over the course of those four days. They are far too numerous to name individually here or probably even accurately remember. Wes and Leon headed home on Monday, and I hitched a ride with my old friend Tom Hailey, who was one of the main people responsible for us getting signed to Relapse back in 1997, to his home in Raleigh North Carolina where I spent a very nice night with he and his lovely wife Cathy eating really good vegetarian pizza and sharing music, beers, and laughs. The following day I headed to South Carolina to spend a week more or less relaxing with my mom, stepdad and grandmother. Good times. But back to matters at hand, the next episode here will feature our exciting return to the old world, and because it's Exhumed, another live line-up change. Ah, some things never change. Or always change. Whatever, you know what the fuck I mean!

Over and out true believers! Stay tuned for another book-length thriller from the usual gang of idiots!